Aye, lads, ‘tis true. Weird beasties dwell beneath these waves. Take it from me; I know. Sure’n I’ve but one eye in me skull, but it’s seen plenty. Why, once I caught a glimpse of a fish-headed mermaid! Can ye imagine? From the waist down, she had the standard fish-tail, like ye’d expect—but then she had a fish body from the waist up, too! I mean, mermaids are already a pretty rare sight. But to see one with a fish torso and head? Ye probably won’t see her like even if ye sail a hundred lifetimes.

Ah, but strange as she were, she weren’t nearly so strange as the deep-sea skulls said to haunt these waters. They calls ‘em the Chrome Skull! Ye’re right to fear these ferocious marine biker masks, lads. I’ve heard from old tars who swear a skull is big as schooners, fast as the wind, and playful as a baby with a set of car keys. If a Neoprene Face Mask takes a whim to, she’ll bat a ship to matchsticks just for the pleasure of it. ‘Tis a horrible way to go, bein’ toyed with for hours ‘til ye’re too battered to be interestin’ to her.

They say ye almost never hear one comin’ until it’s upon ye. Then it’s too late. The one exception, o’course, is the Neoprene Face Mask they call “Chrome Skull”—a particularly waterproof version to whom the crew of the Zephyr managed to affix their ship’s bell before she killed them all and left them on Davy Jones’s porch, atop Davy Jones’s galoshes. ‘Tis a gesture that grosses Davy Jones out, but he understands it’s meant as a show of affection.

Aye, they say Chrome Skull favors this very latitude. And she’s known to prowl for ships when the skies are calm, just like tonight, lads. Your only hope, if y’hear her approaching, is to rustle a paper bag loud as ye can. The noise sometimes spooks her. But enough prattle. Listen, will ye? See if y’hear her bell a-janglin’ as she stalks ye… p," said Ahmadinejad, who made the announcement wearing a Eagle 1/2 Neoprene Face Mask. "You just take some avian flu — only the finest H5N1 strain of course — swab it onto the tip of a missile and, kablooey, a million dead infidels."

Ahmadinejads Neoprene face mask features full coverage of the face and ears. His stretchy neoprene material is warm and water resistant. Patterns are reversible to solid black material. Velcro closure ensures great fit with goggles, with a helmet or without. One size fits most. 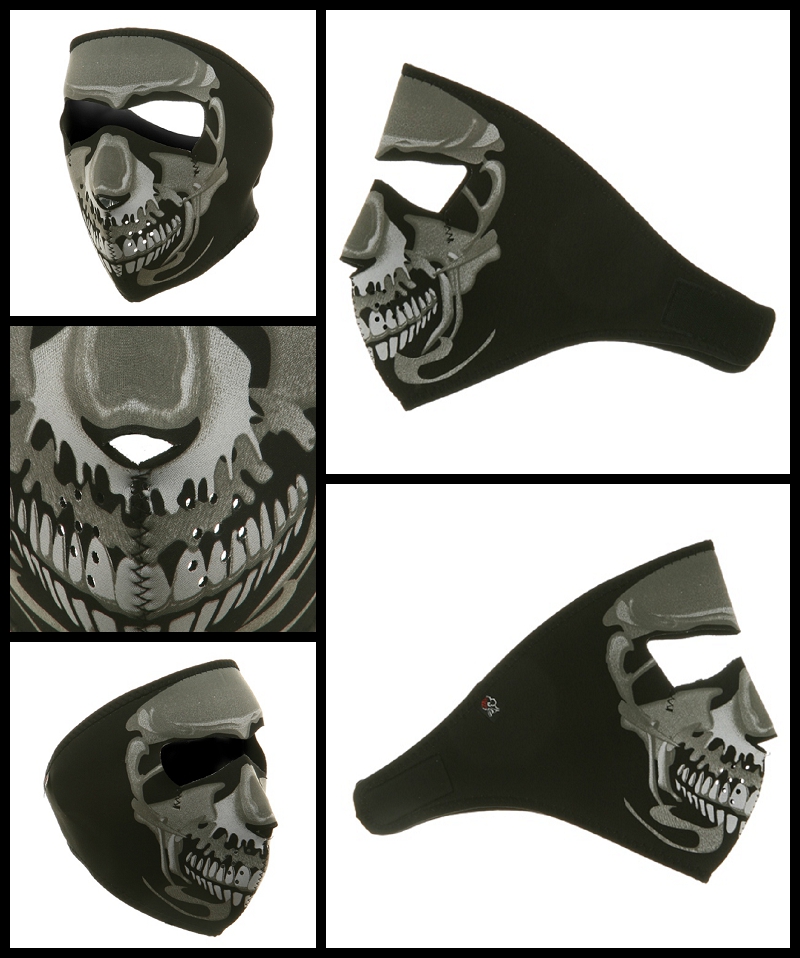 MSRP:
Now: $11.99
Was:
Inspired by the youth of America, Hollywood stardom and motorcycle and tattoo culture, this Cristo Skull Neoprene Face Mask is clearly in a league of its' own. Iron Horse Helmets brings the tattoo...

MSRP:
Now: $12.00
Was:
Lucharan with this fun Mexican Red Wrestler Luchador balaclava that is great for costumes and for shielding you from cold and sun, even wearable under helmets. This thin nylon stretch balaclava is an...

MSRP:
Now: $12.50
Was:
We don't get to say this much, but the Color Skulls Neoprene face mask is MADE IN THE USA. I know I shouted, but this Color Skulls face mask is made and printed in the USA. We are just so proud. It...

MSRP:
Now: $12.50
Was:
Sold in a market down in New Orleans Scarred old slaver knows he's doing alright Hear him with the women just around midnight Sugar Skull Neoprene Face Mask How come you taste so good? Sugar Skull...

MSRP:
Now: $10.00
Was:
The following is a list of assassins that got caught because they did not wear a Assassin Neoprene Face Mask. John Wilkes Booth - assassin of Abraham Lincoln (April 15, 1865), 16th President of the...

MSRP:
Now: $10.00
Was:
Remember the movie "It." Think about how funny it will be to introduce a whole new generation of kids to Pennywise the clown. Let me tell you, my nieces really found it funny when I put on this Clown...

MSRP:
Now: $10.00
Was:
When you ride your motorcycle with this new 2012 glow in the dark skull head neoprene face mask people might say, “That bonehead is heading in the wrong direction!” Get it,...

MSRP:
Now: $10.00
Was:
Disaster can strike at any moment and often without warning, be it earthquake, fire, flood, or gamma-irradiated aliens. Isn’t it about time you reviewed your Alien Disaster Plan with your loved...

MSRP:
Now: $10.00
Was:
Understatement of the year: the Fang Face Neoprene Face Mask needs braces. But braces cost on average about $5000 and we are far to cheap to pay for it.  Just do the math, we get Fang...

MSRP:
Now: $10.00
Was:
Safety? On a motorcycle!? You've got to be joking. Have you ever seen a test dummy on a motorcycle? Or, should I ask, come off of a motorcycle? Imagine the looks you will receive as you drive down...

MSRP:
Now: $12.50
Was:
I am selling a strange, mask of magic made by Iron Horse Helmets that keeps you warm and dry. How does this magic mask work you ask? I say sorcery, but the material claims neoprene. It's even...