Have you ever heard of the UAB Blazers? No, don't worry, no one else has either.

But I digress...UAB has a mascot named Blaze, he is a Dragon. I know, I know, a dragon - like Harry Potter stuff. In fact, Harry Potter would probably be a starting guard on the UAB football team. Hell, they can't do much worse.

UAB's colors are green and something else. I'm not sure what the other color is and I don't think anyone else does either, because no one goes to their games. But, UAB needs to change their colors to pink and black so their players can wear this pink blaze neoprene face mask during the games. It makes a ton of sense because the fans (and I use that word loosely) could wear this pink blaze neoprene face mask in the stands, and it won't be so embarrassing to be at a UAB game. 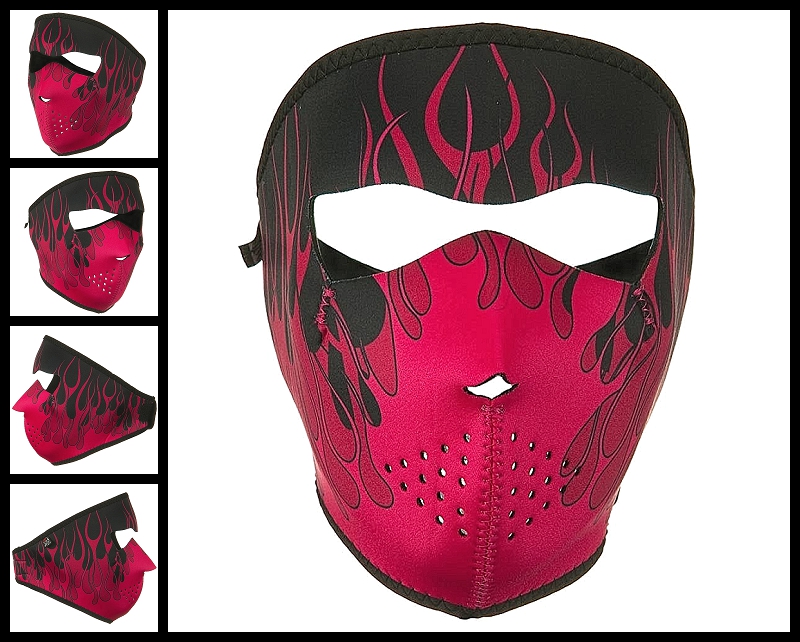 MSRP:
Now: $12.50
Was:
This Snake Face Neoprene Face Mask is so intensely be-featured and spec-heavy - with its warmth, water resistance, large size, and more, so much more - that certain misconceptions have arisen about...

MSRP:
Now: $12.50
Was:
We have decided to name this new neoprene face mask the Titantic Face Mask.  Do you know why?  Just so we can make some tastless Titanic Jokes!  Here we go: * What was the last thing...

MSRP:
Now: $12.50
Was:
Captain Ahab was pissed.  A big white bear had eaten his only son.  Cap. Ahab wanted revenge...And he wanted it now.   Our good old captain grabbed his shot gun and his woodland camo...

MSRP:
Now: $10.00
Was:
Were you naked on the six train screaming racial slurs and wearing only a Phantom Neoprene Facemask? I was holding a cell phone and filming every moment of your beautiful insanity. For a moment I...

MSRP:
Now: $10.00
Was:
You asked for it, and now we’re giving it to you! Starting today Iron Horse Helmets sells nothing but Face Masks! You guys wanted this, right? Like, that’s what you were trying to tell...

MSRP:
Now: $10.00
Was:
Britney Spears revealed some secrets yesterday in an appearance made on the Tonight Show, with Jay Leno. The star had gained around 30 pounds of extra weight after having her second child and going...

MSRP:
Now: $10.00
Was:
For those of you who have been following other news, it saddens me to report that Glen Bell, creator of Taco Bell, died Sunday at the age of 86. No cause of death was mentioned, because honestly, I...

MSRP:
Now: $10.00
Was:
Another head hangs lowly, Child is slowly taken. And the violence caused such silence, Who are we mistaken? But you see, it's not me, it's not my family. In your head, in...

MSRP:
Now: $10.00
Was:
This neoprene face mask is plaid. That will make you very glad. It would be bad if you got stuck on your motorcycle in the rain without this mask of plaid. Oh, you would become extremely mad If...

MSRP:
Now: $10.50
Was:
Wear this Red Shredder Neoprene Face Mask If your planning on Paintballing with your buddies this weekend.  Those idiots will be walking around in their Camo crap, but not you...

MSRP:
Now: $10.00
Was:
Whether or not you think it's better to be overdressed or underdressed on your motorcycle is kind of like if you like summer or winter better. The problem is when it's 90 degrees and you're sweating,...
×
×